How to Stop Having the Same Fight Over and Over 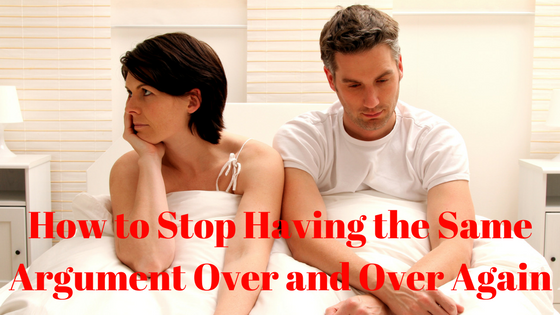 After becoming a couples therapist, romantic comedies changed for me. Date nights become fodder for blog posts and the dysfunctional dynamics in movies stopped being so funny. Instead, I laugh inappropriately at things that capture what it’s actually like to be in a long-term relationship. For example, I was watching the Big Sick with my husband the other night and there is a scene in it with a married couple fighting. As they get into it, the husband refers to their fight as a compilation of their “greatest hits” and says that he can do the whole thing from memory. As a marriage therapist I had to laugh. Because isn’t that what we all do as married couples? Have the same fights over and over again?

If you’re tired of banging your head against a wall during arguments, you’re in the right place.

Half the couples who see me for therapy list conflict resolution as a main goal.  Like the rest of us, they don’t want to have the same argument over and over again. They’d rather fights be productive than route. So you’re in good company if you want to have better conflict and to fight like adults.

First and foremost, you have to be willing to do things differently. It’s the only way to get a different outcome. Which means, as you start to get into your compilation of greatest hits (and sounding like a broken record), you need to switch it up. Give up hammering in your point. Because where does that get you? Frustrated? Unsatisfied? Spinning your wheels?

In order to get a different outcome, you have to do something different.

Now I’m going to go out on a limb right now and assume that because you’re reading this blog post, you are not currently in the middle of a knock-down, drag-out fight. Which hopefully means that you’re relatively calm. And this is the perfect time for some self-reflection. Because when you are in the middle of an argument with your spouse, you are too overwhelmed and flooded to think clearly.

In fact, your brain is reacting like there is a poisonous snake on the ground. So empathy goes out the window and you go into fight, flight, or freeze mode. This is why every major argument ends with yelling, leaving, or shutting down. If you are looking to handle conflict better (like the biologically superior humans that you are), you’ll want to first identify where you are going wrong. After you figure that out, you can fix things.

Right now I want you to look back on a recent argument with your spouse and ask yourself “What did I say and do?” Be honest. This isn’t the time you sugarcoat it. Jot a couple of notes if you can. And then ask yourself “what were my partner’s reactions to the things that I said/did?” Now I want you to think of any similarities that you see between that argument and others. Is there a pattern here?

The trick is to do something different the next time you get into one of your “greatest hits” fights. What could you say and/or do that is DIFFERENT? Brainstorm here. This could be anything from using humor (one of my personal favorites) to taking a deep breath. It can be responding if you typically shut down. Or shutting up if you typically yell. Analyze your arguments and come up with a new game plan because more of the same isn’t working for you. Escalating what you’re already doing is just going to end in disappointment. You’ve tried that, been there.

I believe your marriage can be awesome. You just need to try something a little different. For some people, that’s reading (and implementing) about how to argue like an adult or tips on cooling down conflict. For others, that’s scheduling a couples therapy appointment. Or perhaps, it’s filling out the form below to find out the 3 Magic Words to End an Argument.

No matter what path is right for you, I look forward to helping you on your journey to feeling centered, connected, and conflict savvy.