5 Tips to Better Conflict with your Spouse 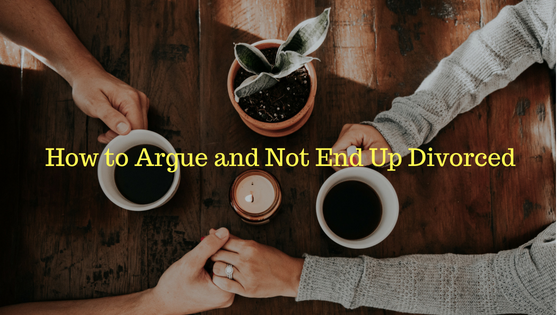 Fighting with your partner sucks. I hate it. My husband hates it. And I imagine that you and/or your partner hate it too. I mean, who wants to feel disconnected, hurt, resentful, overwhelmed, and frustrated? Not me! And probably not you either. Which is why you’re here. You want/need something to change. I hear ya.

You need a good roadmap to handle conflict. And, if you’re like most of the couples I work with, your current roadmap leaves you stranded in a ditch (not riding off into the sunset). Your fighting is more destructive rather than productive at this point. And you want to build your relationship up, not tear it down. You love your partner (even if you don’t always like them!) and you want this marriage to work. Which means you need to get this conflict thing down. That’s where I’m here to help.

Conflict is as inevitable as allergies come springtime. Just like Chicago is known for its pollen count, relationships are known for their arguments. Why? Because couples are comprised of two separate people with two separate viewpoints. Which means it’s fundamentally impossible to see eye-to-eye on everything. This also means that trying to persuade your partner to see your point of view might be futile.

That being said, I’m not trying to suggest that you have to stay as gridlocked as the Dan Ryan during rush hour. In fact, there is a way in which you can argue that can promote connection and understanding rather than hurt and resentment. Keep reading to learn the five tips to better conflict so that you can feel connected, understood, and valued in your relationship.

Right now you’re likely feeling stressed out, on edge, and wary of your partner. The littlest things devolve into a major argument. And it has you feeling like you’re walking on eggshells sometimes. You feel like you’re navigating a field of landmines, never sure when the next fight is going to be set off. Living like this is exhausting.

Your arguments become a pattern of attack and defend, tit-for-tat. They’ve become so familiar that you can probably recite your fights by heart. It’s almost like you’re following a script—a director calls “action!” and you’re off to the races. And, at the end, you retreat to your separate emotional or physical spaces feeling like there is a gulf between you.

While it’s possible to go on as you are, eventually ineffectual conflict management can take its toll on a marriage. Over time distrust and resentment override the positive feelings and there are less and less “good” interactions. Nagging and criticism become par for the course. You hate this pattern but you just don’t know how to break it and you’re hoping for some guidance. Because you love your partner and want a happy, healthy marriage. Don’t worry, I’m here to help.

Can we learn to fight better?

It’s not whether you fight that determines relationship success, it’s HOW you fight. My guess is that you want to feel heard and like your viewpoint matters. But right now it feels like you’re talking to an antagonistic debate partner or a brick wall. No matter what you say, nothing seems to get through.

Why does this happen? Because, too often, couples set out to “win,” to persuade their partner of their point of view. And, let me tell you, this is the surest way to lose. You both dig in your heels and stand your ground and nothing gets resolved. And both of you end the argument frustrated and completely unsatisfied.

So instead of listening to respond (and make your counterpoint that they’ve heard exactly a million and one times), listen to understand. This means setting aside your own agenda to try to see your partner’s point of view. Because, like you, your partner wants to feel heard, valued, and understood. So ask: “Help me understand why this is important to you.” “What does this mean to you?”

I know this sounds ridiculous. But humor me here. Because the way you’re fighting isn’t working. If you were happy with it, you wouldn’t be reading this blog post. So, the question I have for you right here and right now is: Are you willing to try something different? Are you willing to put your pride and resentment aside to work on improving conflict and your relationship? Are you ready to have a happy, healthy marriage where both of you feel connected, understood, heard, and valued? If so, read on. I’ve got some practical, useful, and proven tips to help improve your conflict.

First, pause. Take a chill pill. And own your own shit.

In order to have a productive conversation about conflict, you need to move away from blaming and criticism. Which means that you need to make this about you—your feelings and your needs. One of the most important life/relationship skills that you can develop is to identify and ask for your emotional needs to be met. And the root of much conflict is ineffectively communicating them or being hurt that your partner isn’t responding to your needs.

So I’m going to say something radical here… The reason you are upset is because of YOU. It is because you are having a reaction to what was said/done (or not said/done). So before you start in on your partner, turn the focus to you. Take some deep breaths. Calm yourself down and start to figure out what you are feeling and why YOU are feeling this way. What is this triggering for you? Are you feeling dismissed, unimportant, ignored, alone, not good enough…? What is the feeling that is coming up for you? And what do you need from your partner?

How you start a conversation almost always determines how it is going to go. Feel like your fights sound like a broken record? This is why. One of you starts in (harshly) and it’s off to the races. Tit-for-tat, attack-defend… Trying win, you both lose. And that’s not working for you. So let’s try something different. Let’s start gently.

This is an incredibly important component to changing the way you fight. While it’s simple for me to share in this blog post, it isn’t necessarily the easiest to master. So don’t feel ashamed if you’re struggling to implement it. Many of the couples that I see in therapy struggle with this one. With help, they are often able to master it and the other conflict resolution techniques.

“You” statements often feel like criticism. And when people feel criticized, they get defensive. And once those defenses go up, your partner isn’t listening to a word you say. That isn’t really what you’re looking for, is it? You’re trying to communicate and I want to help you do that. I want you to feel heard, supported, and validated.

Like criticism, defensiveness hurts relationships. The antidote to defensiveness is taking some responsibility. It doesn’t mean that you need to completely agree with everything that you hear your partner say. I’m not that unreasonable! But it does mean saying, “Okay, I can see why from your perspective you might feel that way.”

It’s saying that you play a part in this too. Relationship problems aren’t one person’s fault. It takes two to enact this fight. Owning your role is crucial to avoiding the escalation and disrupting the broken record. Because the attack-defend, tit-for-tat, requires you to get defensive. So if you take responsibility (for a piece of it, not the whole shebang), you’re already switching the grooves on the record.

Self-soothe/take a break if necessary.

You are not always in a place where you can engage in healthy conflict. Sometimes you’ll get flooded—so overwhelmed that you’re brain is acting like there is a poisonous snake on the ground. And you are in flight, fight, or freeze mode. Which means your brain has turned off the vital skills of empathy and problem solving. While these skills are unnecessary when you’re in impeding danger, they are critical to engaging in healthy conflict.

In order to regain access to that part of your brain, you need to self-soothe. So let your partner know “I am totally flooded. I need to go calm down so that we can have a productive argument.” Then take at least 20-30 minutes to relax. Avoid thinking about the fight (that’ll keep you in fight/flight/freeze mode) and focus instead on calming yourself down. One great way to do that is to engage your five senses. Notice what you are seeing, physically feeling/touching, tasting, hearing, and smelling.

At the end of the day, HOW you fight makes a huge difference in your quality of life. Conflict can lead to connection and understanding or it can lead to isolation and frustration. Which is why creating a new roadmap for conflict is a total relationship game-changer. And I get to witness this first hand when working with couples in therapy. Together we identify patterns that are keeping them stuck and create new ways of communicating and managing conflict that foster connection and intimacy. As a result of counseling, many couples go from feeling lonely and misunderstood to feeling like their partner has their back.

Ready to stop fighting and start reconnecting? Reach out to schedule your FREE 15min consultation!