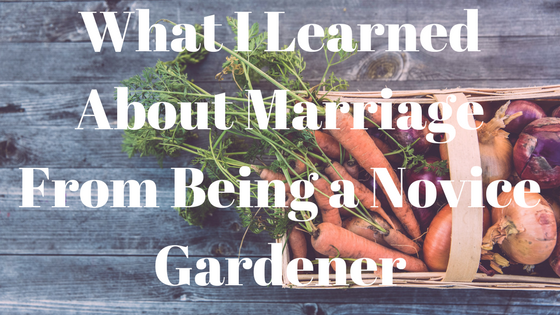 One: It takes a daily commitment

Just like in marriage, if you aren’t committed to tending to your garden, it might survive but it won’t thrive. You don’t always want to show up and put in the work. Sometimes you’re feeling lazy or unenthused. In those moments you have to remember your goal (whether it’s a solid marriage or delightful summer tomatoes) so you can put in the investment.

The requirements for a successful garden are not that different from the requirements for a satisfying marriage. For a garden, you need to water every day, pull weeds regularly, and protect your garden from intruders. In a marriage, you need to commit to your partner every day, address the things that come up between you, and work together to protect your relationship.

Two: Even with the best intentions, things will go wrong.

I read gardening books, tended to the garden regularly, and still lost an entire crop of arugula because it “bolted” (aka flowered and turned bitter). I’ve worked with so many couples who really felt like they were doing their best and, despite their good intentions, things got off track. Just like in gardening, we need to learn from our mistakes, do it differently next time, and make the best out of the circumstances. Turns out bolted arugula makes for awesome pesto.

Three: Acting on assumptions is a dangerous game

I am diligent about watering my garden. Even though I often want to stay home and watch Netflix after a long day at the office, I show up at the garden almost every day. On my second round of dying cilantro, I finally read the instructions. In my attempt to do “the right thing,” I’d been killing it with too much water! I see this phenomenon with couples all the time. In their attempt to meet their spouse’s wants and needs, they end up irritating their spouse because they acted on assumptions and got it wrong.

Assumptions in gardening can prove deadly for plants. Built up over time, assumptions in marriage can have the same cumulative effect. We want to feel valued and heard by our partner. If all we see is them getting it wrong, we have no idea that they were trying to do it right. When we consistently miss each other, we run the risk of missing out on the marriage that we want.

Four:  If you neglect it, there won’t be much left to salvage

If you neglect your garden, the weeds will overtake your plot and very little vegetables will grow. It’ll be an eyesore and you won’t want to deal with it. It’ll be the end. It’s the same with marriage. When you don’t invest in your relationship and nurture it regularly, it begins to whither and look less desirable. Often this is fertile ground for affairs. Affairs are the weeds and, if you don’t uproot them fast, they can overtake your relationship. You’ll look at the overrun garden and wonder if it’s worth saving.

This is where I want to offer hope. It’s possible to keep it up, replant, tend, and grow something beautiful. But it requires work, investment, and commitment. And it will take both of you to clean up that plot, plant and fertilize, and grow the garden you both had hoped for on your wedding day.

Five: Sometimes you need a little help from an expert

As a brand new gardener, there is a lot that I don’t know. Sometimes the best thing to do is find an expert who can guide you in this process. It is far more effective than continuing to muddle through on your own. Seeking guidance has been the best thing that I’ve done as a gardener.

Couples who come in for counseling have tried to find a solution on their own but need some help. They’re willing to admit they don’t have all the answers and that their priority is saving the relationship. The want to revitalize it and grow something beautiful that can sustain them for years to come. If you are in need of extra assistance, feel free to reach out for help and support!